Paris / Leipzig / Bern / Vienna, 20 July 2015. The trend towards short-term power trading is unbroken: In the first half year of 2015, a total volume of 216.6 TWh was traded on EPEX SPOT’s Day-Ahead and Intraday power markets. This is a 16.1% increase compared to the previous year’s volumes (186.6 TWh) and the best half year ever recorded on EPEX SPOT, with every market segment contributing to the growth. In addition, 20.8 TWh were traded on APX markets since 4 May 2015, part of EPEX SPOT since that day.

From January to June 2015, power trading on the Day-Ahead markets on EPEX SPOT accounted for a total of 195,882,116 MWh (January to June 2014: 172,105,786 MWh). All markets in Germany, France, Austria and Switzerland contributed to this growth. The French power market stood out against these overall strong results with a year-on-year increase of 58.3% on the Day-Ahead, due to the shift of trading volumes towards the free market.

On the EPEX SPOT Intraday markets, a total volume of 20,784,446 MWh was traded in the first six month of 2015 (January to June 2014: 14,519,046 MWh). This growth of 43.2% is in line with the development of Intraday market volumes over the past few years. Fueled by the German/Austrian Intraday market, on which volumes increased by 48%, Intraday trading has become one of the main pillars for trading of renewable energy sources across Europe. Trading in 15-minute contracts increased significantly through the launch of the 15-minute call auction on the German Intraday market. With the latest reduction of lead-time to 30 minutes locally and to 60 minutes across borders and in Switzerland, Intraday markets are likely to become even more attractive for power traders.

Please find further details on the volumes and prices below: 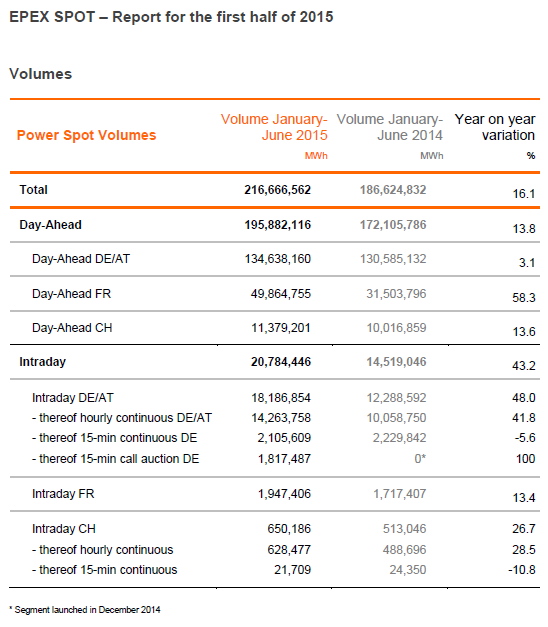