In November 2016 EPEX SPOT celebrated the 10th anniversary of the first market coupling initiative TLC. The Trilateral Coupling between France, Belgium and the Netherlands launched in November 2006. European Power Markets have evolved impressively ever since, and further developments are yet to come. Coupled markets dispose of increased social welfare as well as increased price convergence rates, and they send the most relevant price signal for investment in cross-border transmission capacities.

Market coupling was initially conceived on the continent by the former French Power Exchange Powernext and its Dutch counterpart at the time APX. The former became one of the founders of EPEX SPOT, the latter joined forces with EPEX SPOT in 2015. The initial idea established in 2003 was to use the price signals of national markets to determine the most efficient electricity flows between the countries. As a result, existing grid is used to full capacity, liquidity rises and competition increases. During this process the Belgian Power Exchange was founded, today called EPEX SPOT Belgium (formerly Belpex) and the coupling process between the three countries was complete. The EPEX SPOT French auction was a pillar of this successful Tri-Lateral Market Coupling (TLC), comprising the French, Belgian and Dutch day-ahead markets.

Before long plans to couple the markets of Germany/Austria and Luxembourg were implemented. This extended region of now six coupled countries forms Central Western Europe (CWE). The CWE market coupling went live in 2010. The European Power Exchange EPEX SPOT has been, together with its partners, one of the major drivers of the CWE market-coupling. Furthermore, its core markets Germany/Austria and France also formed the most significant market of the coupled zone, in terms of volumes as well as in terms of liquidity.

In the course of the different market coupling processes, new countries and their respective markets joined, rendering the importance of the Exchange’s markets more and more relevant. The volume chart below shows the total volumes traded on all Power Exchanges coupled via the price coupling principle. The graph illustrates that with each enlargement of the coupled zone the volumes increased significantly, indicating that each new member not only traded power on the market, but enhanced the entire coupled zone. 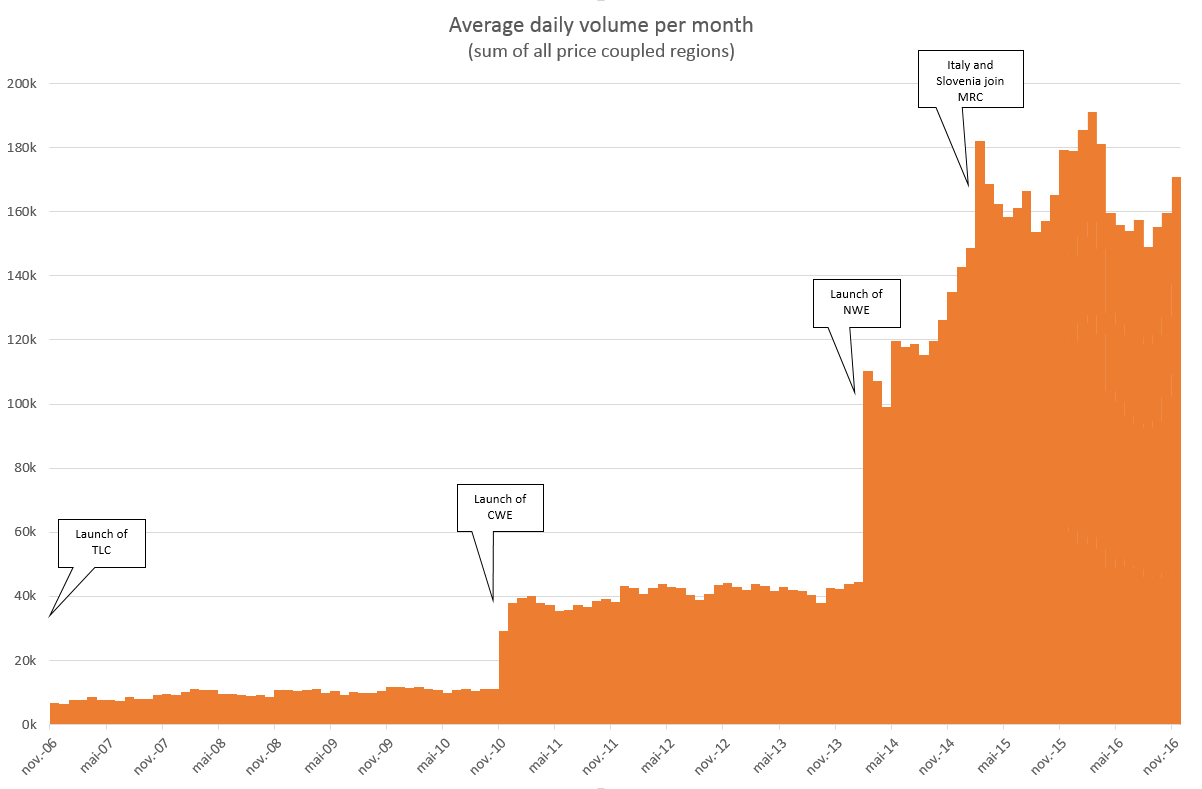 This process was taken to a new level with the introduction of price coupling in North-West Europe (NWE): The so-called tight volume coupling between CWE and the Nordic region, which had been set up as an interim solution, was replaced in February 2014 by NWE, just like the CWE coupling mechanism itself. This is due to the fact that the NWE mechanism is more than just a geographical extension. It represents the first implementation of the new PCR solution, Price Coupling of Regions, a pan-European solution which is built to couple all the power markets in Europe by a single price calculation method.

NWE covered 15 countries at the time of the launch: the six nations of CWE, Great Britain, the four Nordic and the three Baltic countries, as well as Poland and the link with Sweden. Since the PCR solution can be expanded very easily, Portugal and Spain joined in May 2014.

In 2015, the latest step of the power market integration was completed, when Italy and Slovenia joined the now Multi-Regional-Coupling. Today, electricity is traded across 19 European countries, representing 85% of European Electricity consumption. Within the 4 MMC project, Hungary, Slovakia, the Czech Republic and Romania are coupled among each other. The ultimate goal will be to connect these markets to the big chunk of NWE.